We all know about beehive thimbles and other shaped ones with hand applied indents. Once they moved to the machine made ones I have been guilty of being a bit dismissive of them. I thought they were all late eighteenth century (at the earliest) and are very common. Well they were common but I hadn’t realised that they were machine made from the 1600s.

In looking at this I also hadn’t realised that up to the 15th century thimbles were almost exclusively made of leather and when brass ones started to be produced they were imported from Nürnberg (Nuremberg) and later (from the 17th century) from Holland. I had assumed they were made in Britain but, it seems, we didn’t have the means to make the right type of brass until the machine was invented and introduced.

It wasn’t until the 1690s that machine made ones were produced. Nor did I know that started in England - in London for a very short time, then Marlow in Bucks before manufactures sprang up elsewhere and production centred on Birmingham.

Whilst lots of thimbles are attributed to an earlier medieval date it does make you wonder how many actually were. It is more likely that most are 15th century at the earliest. They were expensive to produce and even more expensive to import so must have been a prized possession. Only after they became machine made did the price tumble.

Silver thimbles have a later start date. Supposedly Elizabeth I started that fashion by giving a jewel encrusted one to one of her ladies! So silver thimbles started in the mid 16th century and then became quite the fashion amongst the richer parts of society.

I have been lucky enough to find one early silver thimble - albeit in pieces - and a few beehive types. The machine made ones I’ll look at differently now and try and date them more accurately.

If you want to know more on thimbles this general history is worth a read. Also worth reading is the history of thimble making in Marlow which you can find here.

That's interesting, I'll have to dig my thimbles out!

That’s interesting, didn’t realise they were machine made that early. I’ve never found a beehive thimble,something I’ve always wanted to find. Hopefully one will appear at some point.
Top

Fantastic info and thanks for posting, Cath

Fortunately I've kept every thimble I've found so will be looking into them closely and, like others, will be less dismissive of "modern" examples in future. Well, unless they say "Present from Margate" or similar 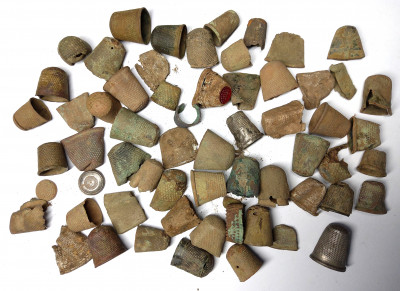 It's the first time that I've ever taken them out. There's a hallmarked silver one in the middle but I've just noticed a makers mark on the one bottom right which also kind of looks silver too though no hallmark. There are six with the squares on top and dots on the side, the rest seem quite samey usual though? There are about eight aluminium ones which I've now cleaned up further and found that four of those are advertising ones for bread, flour etc. Not too old but maybe more interesting than the usual?

This is a great thimble dating guide too.
http://www.ukdfd.co.uk/pages/thimble.html
Top

Fortunately I've kept every thimble I've found so will be looking into them closely and, like others, will be less dismissive of "modern" examples in future. Well, unless they say "Present from Margate" or similar

Agree "Fantastic info and thanks for posting, Cath

Unlike Figgis who has kept all the thimbles he finds I have not as I am not allowed keep them as a lady I know collects thimbles (they take up a lot less room then the dolls she collected previously).

This is the only silver one I have ever found (photo does not really do it justice). In fairness to the lady when I gave it to hear it was in a horrid black condition and you would not have known it was silver let alone that it had a pattern on it. 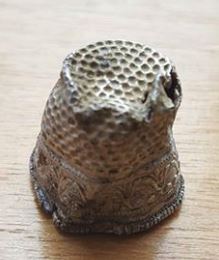 I really should sort through mine. From 1 permission, 350 acres. 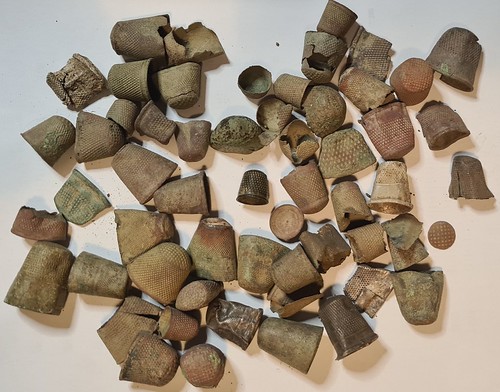 Nice mix of dates there!
chill…karma will fix it