Even when not digging for bottles I still manage to conjure up some from various sources and a nice crate full came my way from my neighbour . It was a return gift from a favour I had done for them and to be honest I wasnt expecting anything back and living in such a small community being helpful to one and the other makes a happy community . The gifted bottles certainly made me very happy . Where they originated from I have no idea and have yet to ask but they are all Codd bottles from Norfolk so they were at one time collected locally .

All of them are clean and in top condition despite their 100 year old plus age except for one which although not as clean as the others is probably one of my favourites due to its condition . At some stage this one bottle had been rolling around in a river or possibly a pond , the contents drunk and then thrown into the murky depths , that satisfying splash as it hits water and gradually sinks from view where it lay in the watery world for god knows how many years . The bottle does have signs of being in a River where the gravel from the riverbed has slightly scoured the surface to a dull opaque finish , something which would take many years of rolling around amongst the rise and fall of floods and the erosion of gravel against glass . What changes this from an otherwise well worn and dull bottle is the effect that water has had on the glass and the beauty lies within the array of iridescent colours from blue , green and purple which have gradually formed within the glass .
This bottle pre dates 1895 and has spent best part of its life underwater and once exposed to natural light the glass emits an array of colours which is quite unusual . 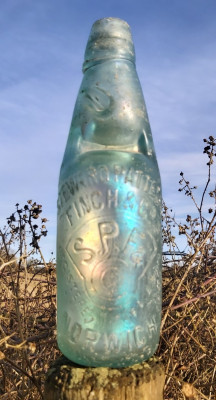 The Codd bottle is probably the most well known and favourites of bottle collectors in the UK , it is a unique design and a favourite amongst children , many a time have we dug these with the tops smashed off so Victorian children could retrieve the marbles , so it is always a joy to find a fully intact one .

The inventor of this famous bottle was a gentleman by the name of Hiram Codd , born in Bury St Edmunds , Suffolk on the 10th January in the year of 1838 . An engineer by trade who in 1872 came up with the unique idea of a bottle filled under gas pressure which pushed a glass marble up into the neck which was sealed by a small rubber gasket . The idea was first patented by him in 1870 to which he went on to succeed in two British patents in 1871 and 1872 and a further American patents in 1872 and 1873 .
It proved to be a popular bottle amongst the British commonwealth countries and Codd bottle are dug in Canada , Australia , South Africa and India .
A bottling partnership was formed in 1877 with Ben Rylands Hope Glassworks in Barnsley where these bottles were made and many codd bottles have the stamp embossed at the rear of the base .It is not unusual to find other bottle making companies to carry their stamp on Codd bottles after the patent registration ceased but the vast majority will carry the Rylands stamp . The partnership between Codd and Rylands was in place until Codds death in 1887 at just 49 years old .

In 1880 , Codd was responsible for introducing the bottle exchange where empty bottles were returned for a small fee , something that many of us as youngsters will remember with the Corona bottles , a few pennies for a few returned pop bottles , an incentive which thrived for many years . 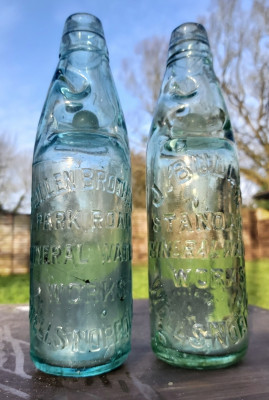 These two Codd bottles are from Wells in Norfolk , one clear and one in an ice blue aqua glass , one carries the Rylands stamp while the other is not stamped which is unusual .


Finally , one of the most unusual patent designs called the "reliance " Codd bottle from William Everetts from 1904 until 1932 Bond Street , Cromer , a favourite seaside resort .
I have heard a few conflicting stories regarding the design of this particular bottle and the idea of two recess sections on opposing sides which enables the marble to move from left to right . Apparently while serving drinks on a train , the steward or stewardess was able to serve customers either side of the aisle from left to right without having to turn around to each passenger . The standard codd bottle only poured from one side while the marble sat in just one recess . 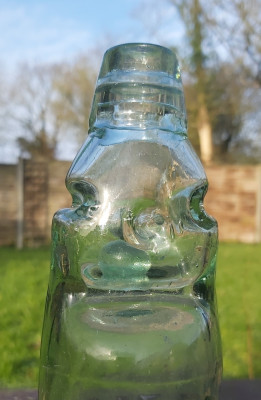 ....although the Granddaughter showed an interest and now has custody of the bulk of the collection

Finally , one of the most unusual patent designs called the "reliance " Codd bottle from William Everetts from 1904 until 1932 Bond Street , Cromer , a favourite seaside resort .
I have heard a few conflicting stories regarding the design of this particular bottle and the idea of two recess sections on opposing sides which enables the marble to move from left to right . Apparently while serving drinks on a train , the steward or stewardess was able to serve customers either side of the aisle from left to right without having to turn around to each passenger . The standard codd bottle only poured from one side while the marble sat in just one recess .

I love little bits of info like this
Would make sense and brilliant that they applied a solution to what was back then only a rich persons experience of being on a train.....

Not only Corona bottles where i lived for a refund, also the traditional Taunton "Natch" cider bottles also got you a refund when brought back to the off licence
Spent many a day scouring the area for such bottles.
I am not known for my ID skills, but i make a cracking brew

good to see a new post on here. Being a bottle digging item a change of spelling was apt.
Very good History lesson on the Trains version of the Codds.
Also like the weathered look of the glass. Have collected small rounded pieces that have been tumbling around in the Sea for many years. People will actually pay small amounts for weathered pieces of Sea glass, sort of modern day deposit scheme.

Would like to see the return of schemes like Corona and Natch had.
You probably already know this but Iron bru only finished their bottle deposit return scheme in 2015, after 110 years. Their final return payment was 30p

Something i have done on a very small scale. In 2 areas where i have found bottles mainly broken ones, i have taken away as many broken items as i could carry on those occasions. To protect wildlife but also to protect the site from those, who may not have the right to be there.
Once home they have the decades of dried mud removed and get recycled unless there is some interesting design or embossing.
Great post again, Paul .

As Dave the Slave said, a great history lesson, much appreciated.