Time seems to fly by rather too quickly the older you get and I cannot believe that it has been almost 18 months since my last visit to a tiny little pond which at the time yielded a bounty of collectible bottles and one rare unrecorded soda bottle from around 1890 - 1900 . It was an exciting dig , the pond was just about dry but a little sloppy in places . The weather at the time was against us though and we had to abandon our dig once the rain came and pretty soon the pond was once again full to the brim and it would have to await another long hot summer to have any chance of making it a feasible priority on our diminishing time spent hunting bottles .
I have posted this photo before many moons ago but this was just part of our bounty from our first visit . 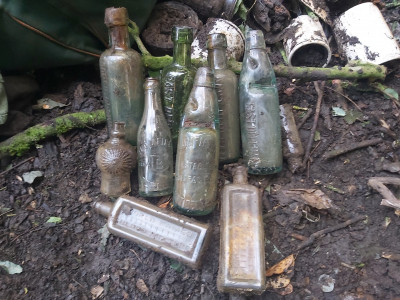 Such was the pretty dismal summer a few quick vists to the pond to check water levels were all to no avail and we put it on the back burner , maybe next year .However as we seem to be having a belated " Indian summer " it was worth one more visit just to see if it was possible to have a splash about before winter sets in and the rain comes with added bonus of a drop in temperature making it far too uncomfortable even with thermal waders . Sadly my old digging buddy couldnt make the trip due to ill health but urged me to go as he was just as curious to know if we had indeed missed anything which we were sure we had the first time round .
Upon arrival and with the weather still favourable I was met with semi dry pond and the most productive area was at the back where the trees lurked above the slop of mud , this was going to be fun and very cold . 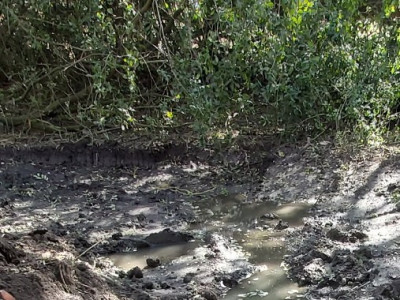 Waders on , jacket off and armed with a large potato fork it was time to ease myself into the muddy porridge and make my way towards the far bank . It was knee deep but with studded wading boots the walking was fairly easy as each step trod over the large lumps of flint that at times felt like bottles . A probe with the fork proved to give more of a dull sound rather that that hollow tap of a bottle , its hard to explain but you get used to it but at times its just like a signal that the coil emits , a bit iffy so best check and sometimes it pays off and other times it doesnt , always good to check though .
First bottle out after much deliberating and it turned out to be a sauce bottle , not one I had seen before but looked ice blue at the thick base despite the clog of mud . Job done and in the bag all wet and muddy ready for a wash .
Scooping out pond mud is like wading through thick wet cement , I had forgot how hard it actually is and plundering through the far bank mud was tiring and you soon get hot but after what seemed like an age the fork pronged another tell tale bottle and a bit of fumbling in the mud and out popped a neat but common stoneware ginger beer . First one of those types from the pond so it was promising .
Very soon I had just about enough and after pulling some plain cream pots and a few other bits it was time to go . A bonus almost full clay pipe greeted me as I reached the home ground . A quick wash down in the pond water and let the sun dry them off while I had a cuppa and basked in the late afternoon sun shine . 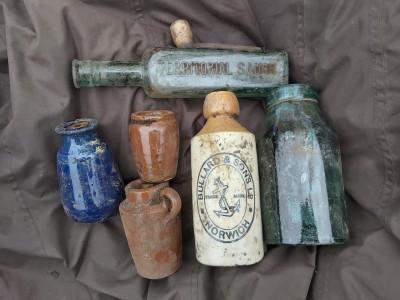 The best of the bunch from a few hours mucking about in the mud , it was good fun but I doubt I shall be back until next summer . The glass jar is quite early and although plain it does have an applied lip and a huge bubble in the glass and is a lovely ice blue glass . 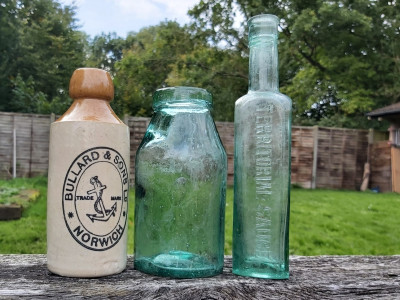 Great read Kb, was digging a dry(ish) pond myself today, I had a couple of hours in it last week also, great fun and my first bottle digging forray as an adult. Will put up some pics on your post tomorrow if thats ok with you

alloverover wrote: ↑
Fri Oct 15, 2021 9:18 pm
Great read Kb, was digging a dry(ish) pond myself today, I had a couple of hours in it last week also, great fun and my first bottle digging forray as an adult. Will put up some pics on your post tomorrow if thats ok with you

Ok, i have just put the kettle on and am going to read this adventure

Loving the look of the blue jar type thing.....what would that have been used for?
I am not known for my ID skills, but i make a cracking brew

Ah pond digging, that reminds me that I still need to find the original bottle dump of that Victorian house. Well according to the land owner the small pond was dredged out by digger and no bottles showed. So that leaves the bigger pond but they say that they have only ever seen the water down to 4' deep, so maybe quite challenging but perhaps still doable? It's surely got to be worth a prod over winter?

I remember the drought year of 1976 and a pond in the village dried up. All sorts came out of there. The best find, not mine unfortunately, was a soldiers WWII kit. Helmet, drinks can, billy tin, and even a rifle. The news soon spread and as kids, we thought that a soldier may have fallen in and drowned. We spent that summer looking for a skeleton—— that never appeared. The other excitement was the police turning up at Wayne’s house to collect the gun. Happy days back then.

Always carefully proof-read what you've typed to see if you've any words out.
Deus with 11" X35 and 9" HF coils. MI 6 pinpointer.
Top

It was amazing what we would find as kids especially growing up in an area which had a lot of RAF bases , Bentley Priory , Stanmore and Northolt etc . Lots of old bombsites still in evidence and the grounds where Churchills HQ was held , the building foundations still exist but you would have a task to locate it now as it has become so over grown but underneath the bramble and nettles the evidence is still there .
Plenty of pill boxes dotted along the River Colne and ex high ranking military personal buildings left abandoned , all were our playgrounds as kids .
The amount of stuff we would find from unfired 303 bullet clips , webbing , Jerry cans and a couple of dozen Air Raid Warden helmets and the star find was a complete Lewis machine gun !!
Top

Always good to see your bottle digging forays.
Your childhood air bases etc, sounds idyllic and you found lots of stuff collectors would pay for now.
If only we knew then, what we know now.
Cheers,

alloverover wrote: ↑
Fri Oct 15, 2021 9:18 pm
Great read Kb, was digging a dry(ish) pond myself today, I had a couple of hours in it last week also, great fun and my first bottle digging forray as an adult. Will put up some pics on your post tomorrow if thats ok with you

Brilliant read (as always!). Love the pipe and that little dumpy green bottle is a gem

You’ve made me kick myself though. The pond in the centre of one of the villages where I detect was dredge a couple of months ago and I saw them taking lorry loads of mud away but never enquired where it was being dumped. What a wasted opportunity