The Nokta Legend will no doubt be considered by those thinking of buying a new Nox whether 600 or 800. It seems to have the 800's features but at the 600's price. If it performs as well as the Nox then it should sell well. But what if it performs better?

I expect that all of the latest SMF machines will be of similar performance so maybe just down to personal preference and affordability?
I await a Nox, Legend & Deus II shootout with great interest but I don't expect any game changes.
Good things come to those who wait.
Top

I think it looks like a pretty decent machine, as is the simplex for the money.

More choice is always a good thing, and if the decision on what to buy is a hard one, then all the better, that means there's plenty to choose from.

Also, different machines respond to different targets in different ways, I'm a member of a club where almost everyone has a deus, there's three of us that have a nox and even I have a deus as well.
I do well with the deus, but I run my machine a lot hotter than a lot of the other members, there's a good few that use basic 1 or deus fast everywhere, they have been detecting a lot of our fields for thirty years, some are starting to experiment as I have joined and started finding good stuff more regularly than most, and it isn't all down to luck, so there's now about ten members using my settings and getting into how to adjust depending on conditions, and there's a few that run different settings to me but know the machine well and do just as well as I do.

When we have all run our machines maxed out and cleared out most of the good stuff, there will still be some stuff there that the deus missed, just because it doesn't like that particular target for whatever reason, then another machine might well have the advantage, whether it's cheaper or not.

I don't think I'll be adding one to my toolkit as I already have three machines, but I'm glad it's been made and released.
That is not dead which can eternal lie,
And with strange aeons even death may die.

Anybody seen the seen the video that Dilek from Nokta/Macro has put out, think she is a bit put out by all the bashing the launch and machine got from certain parties.
Lots saying they have reversed engineered the Nox and put it in the Simplex housing.
Top

bob79 wrote: ↑
Wed Nov 24, 2021 11:06 am
Anybody seen the seen the video that Dilek from Nokta/Macro has put out, think she is a bit put out by all the bashing the launch and machine got from certain parties.


It sounds like she is on the loo on a plane!

Good things come to those who wait.
Top

Oh dear - she's just broken all the rules on how to protect your brand and product. Add to that their website has the following landing page: 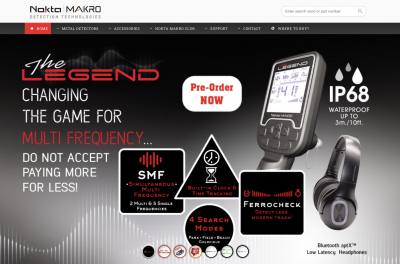 with a main comparative claim they can't support.

A pity, as I'm sure it's a very good machine at a very attractive price.
Top

At the end of the day, people will make all sorts of idiotic comments on Facebook, look at the flat earthers on any post by NASA, but a company or their representative needs to rise above and make their case in a calm and measured manner, not go on a massive rant, you can debunk most false claims without throwing a tantrum, and if the comments are truly idiotic you can just ignore them.

That's done a bit of damage to their reputation in my eyes, if she goes on a public on record rant about comments on social media that speaks to the company culture, so how will the company behave if you need to make a warranty claim?

Gary Blackwell gave a good example of how to do it properly a couple of days ago, there was someone saying something similar about the deus 2 in a Facebook group, that they have just copied the minelab multi frequency now that patent has expired, he just calmly corrected them and pointed out that XP have designed their own system and it makes him sad to read those comments, shut it down in a calm and professional manner and engaged in a respectul conversation with the person that commented. I've also seen representatives from Garrett do it well when they released the Apex as well.

Apart from anything else, Minelab's patents haven't expired! Like any company they patent their technology every time they change something, and they still stand, one of their most recent Australian ones relating to their multi frequency technology was only granted in June or July this year! I'm not going to pay to search their US, UK or European ones but you can bet they applied to everywhere at the same time.
That is not dead which can eternal lie,
And with strange aeons even death may die.

In fairness to Nokta, thier customer service has been excellent in the past, and they really do try to listen to what customers want, hence this new machine...
Top

Apart from anything else, Minelab's patents haven't expired! Like any company they patent their technology every time they change something, and they still stand, one of their most recent Australian ones relating to their multi frequency technology was only granted in June or July this year! I'm not going to pay to search their US, UK or European ones but you can bet they applied to everywhere at the same time.

You're right but I suspect what folks are referring to are the early multifrequency patents that would have prevented others developing technologies in the same area without having to pay a licence to Minelab, assuming they ever wanted to go down that route. Those patents are now over 20 years old and will have expired. They will, as you say, have new patents based on BBS and FBS but will have to acknowledge the prior art, including their own, in each of those and will only protect the new additions.
If Nokta and Deus now have more room to play in the multi-frequency area they will still have to work around the newer Minelab patents and that will all be somewhere in their box of tricks on the stick.
Top

True, there are some old ones that will have expired, but Garrett, XP and Nokta all know that they'll never compete by copying a 20 year old expired patent.

If you could then we might as well all ditch the equinox and buy a sovereign, even minelab know that the technology in their old patents isn't competitive any more, otherwise they wouldn't have bothered improving on it.

That's the whole point of a patent really, it protects your intellectual property for long enough for it to become obsolete.

I have a 20 year old machine, it's still useful in certain circumstances but it's never the first of the three I reach for!
That is not dead which can eternal lie,
And with strange aeons even death may die.


It's not copying an old patent or old technology; it's just getting those patents out of the way to allow them to do their own innovations in the multi-frequency area.
If, and I stress if, (I haven't read the early patents) XP or Nokta wanted to launch a brand new way of signal processing they would first need space to generate and receive those signals without infringing other patents. I can only guess that removal of early patents has just given them more space to work.

Mind you, if Badger gives a poor review of the Legend I hate to think what Dilek will say

with a main comparative claim they can't support.


But they don't need to as it's non specific.
Good things come to those who wait.
Top

Oh yes they do. By being non-specific they compare themselves to the whole of the multi-frequency market. Therefore, they need to compare with any other MF machine, including their own if they have one. Claims, advertising, codes etc. is just one part of the day job. The way round a non-specific claim is to make it specific. That's why you see claims of "better than the market leader" as you only need to compare vs one product. As compared to, "the best" which compares to all comers, no matter how small, in the category.
Top

DaveP wrote: ↑
Wed Nov 24, 2021 6:48 pm
Oh yes they do. By being non-specific they compare themselves to the whole of the multi-frequency market.

What about Minelab's claim that the Nox would make all single frequency detectors obsolete?

Good things come to those who wait.
Top

Easylife wrote: ↑
Wed Nov 24, 2021 6:55 pm
What about Minelab's claim that the Nox would make all single frequency detectors obsolete?

I need to see the claim in context and 'obsolete' is a tricky word with more than one meaning. On the face of it you would say they can't support it but, as always, it depends. Happy to pick it apart or show how it could be supported (or not) if you can find it.
Top

‘Changing the game’ is a nonsensical statement that means nothing. Having been through many an Advertising Standards Association (ASA) approval for adverts I’d say you’d get away with that. The Minelab claim to make other machines obsolete would however be unlikely to pass muster, so if the other manufacturers didn’t like it they should have complained