Surprise in the ceiling

One of my neighbours has recently had her ceilings replace whilst renovating her cottage. These laundry tags were found stuffed at one end of the ground floor ceiling.
Obviously military - any idea what age they would be? WW1 or 2? And any information on the names?
Thanks 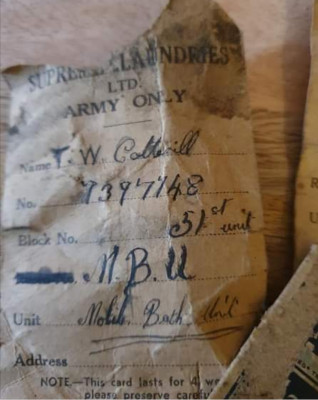 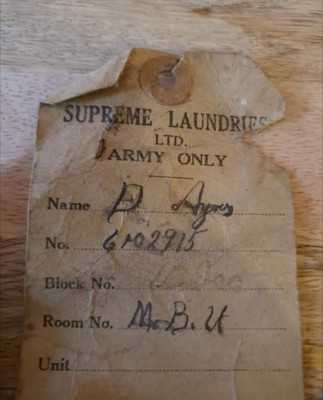 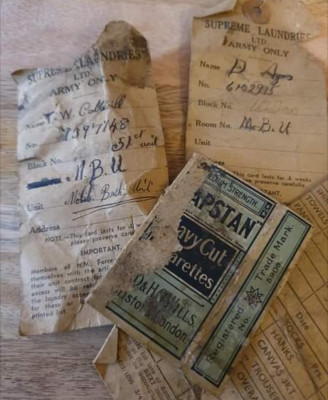 Looks like they are a couple of WW1 service numbers .Army Numbers were initially a maximum of seven digits, and later around the beginning of WW2 groups of numbers up to eight digits were added.
It changed from 1950 onwards, when Soldiers in the British Army were and currently are still given an eight-digit Service Number. So those numbers could be 1st WW numbers or WW2. The only way you`d know for certain is to check the numbers themselves against Army records
I can still reel mine off by heart. Its something you don`t forget.

PS... Its not definite because they could be some early WW2 ones which some did go into but either way they are quite old . The Fag packets a bonus

Things aint cooking in my kitchen strange affliction wash over me.
Julius Caesar, and the Roman Empire
Couldn't conquer the blue sky…
Top

Very, very nice find. The cigarette packets is from the 20s or 30s I believe. There’s an interesting article here that might help.

Sure Evan and others will be able to tell you more about who the service number belonged to though which will be much more interesting!
Sometimes I question my sanity but the unicorn and the gummy bear told me I’m fine
Top

Could not find the other guy.


FYI: I do not think there were "Bath Units" in WWI.

Ah yes your Army number - something you never forget along side the Wife's birthday and your wedding anniversary !!!!
Top